In the subproject “Using computer models to predict drug resistance in colon cancer” we will develop a deeper understanding of colon cancer networks and convert them into computer models with which we will be better capable to predict response to treatment. The combination of computational, experimental and clinical testing will be explored to understand drug resistance mechanisms, further paving the way towards personalised treatment of colon cancer.

In the COLOSYS project we set out to develop a deeper understanding of colon cancer networks and have converted them into computer models with we now use to predict response to treatment. In our approach we first gathered data on colon tumors that have been collected in international efforts and used these data to find genes that show frequent abnormal behavior in colon cancer. Such genes are believed to be ‘driving’ the disease, they play an important role in response to therapy and most importantly, these genes help us to focus on the most important parts of the colon molecular network. Next, have gathered published knowledge on molecular networks in colon cancer in a repository of data and knowledge, and we have combined this knowledge with the driver genes to construct computer models of the molecular networks in colon cancer.  We have further refined these models with data collected on colon cancer cell lines (tumor cells grown in the laboratory), and are now using these models to predict response to therapy and test these predictions on cell lines and on cultures derived from patients (organoids). 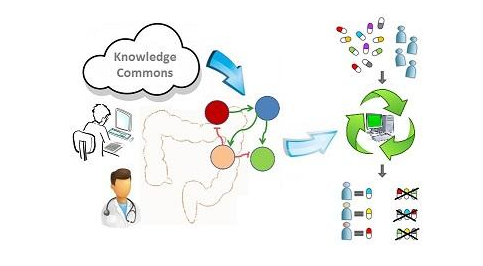 The combination of computational, experimental and clinical testing will provide understanding of drug resistance mechanisms, and allow personalized treatment of colon cancer.

NTNU has constructed a fully automated pipeline that builds cell-type or tumour-specific models from causal interaction statements (Atopo). The resulting general topology is configured to represent specific cell types using biomarkers generated from relevant omics data (Aomics). This configuration step uses a genetic algorithm to optimise the model’s logical rules such that its steady state maximally represents the activities of the biomarkers (see below).

Conversion of general logical models (Topology, generated with Atopo) to specific models (Logical model, generated with Gitsbe) through the use of a genetic algorithm that iteratively mutates and tests model stable state fitness against biomarker baseline (steady state) observations (Steady states) until a final model is obtained that maximally represents observed biomarkers. These models are then ready to be used for testing the effects of drug perturbations.

The central aim is to develop in silico therapy response predictors that allow individualised treatment based on patient-specific driver and resistance mechanisms, thus significantly increasing response and cure rates in Colon Cancer (CC).

To achieve this central aim, the specific objectives of COLOSYS are:

Thus, our overall aim is to develop an automated modelling pipeline that can produce logical models for any specific cancer type, be configured with baseline biomarker data of the tumor, and deliver candidate combinations that warrant further testing in pre-clinical and clinical applications. 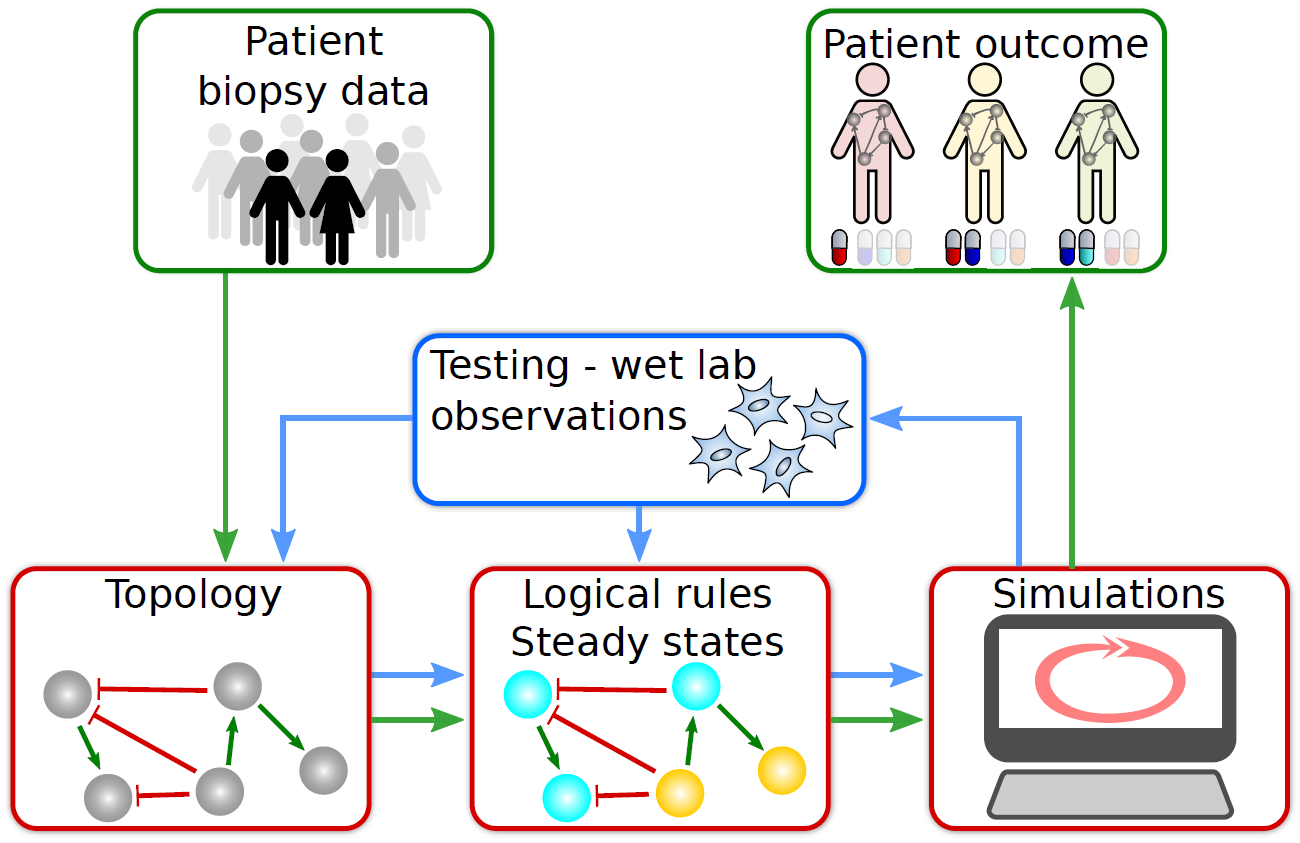 The COLOSYS consortium makes data available through the FAIRDOMhub for a persistent storage and sharing of the produced results. All data is findable and accessible at https://fairdomhub.org/projects/81. Software tools are publicly provided in software development platforms such as GitHub. In the FAIRDOMhub, a link to these platforms is provided to enable users to access the code source and implementations. Datasets are stored, or linked, in the FAIRDOMhub, from experimental datasets to computational models. It should be noted that the computational models are provided in different formats which allows to use them in diverse tools (Cytoscape, Navicell, GINsim, COLOGICS).

Plan for release of additional data and software

This involves the Drug Synergy prediction platform COLOGICS and the CRISPRi data. Both will be made available through GitHub and Figshare, once the manuscripts describing these have been published.

Guidelines for the overview of all COLOSYS consortium data

The COLOSYS consortium has described its WP activities and various deliverables/datasets in the FAIDOMhub platform, following the ISA format. The structure is as follows: Each workpackages, defined as investigations, contains deliverables that are defined as studies in FAIRDOMhub. Meaning that for each deliverable, specific datasets or software tools are linked as being assays or models of a particular study.